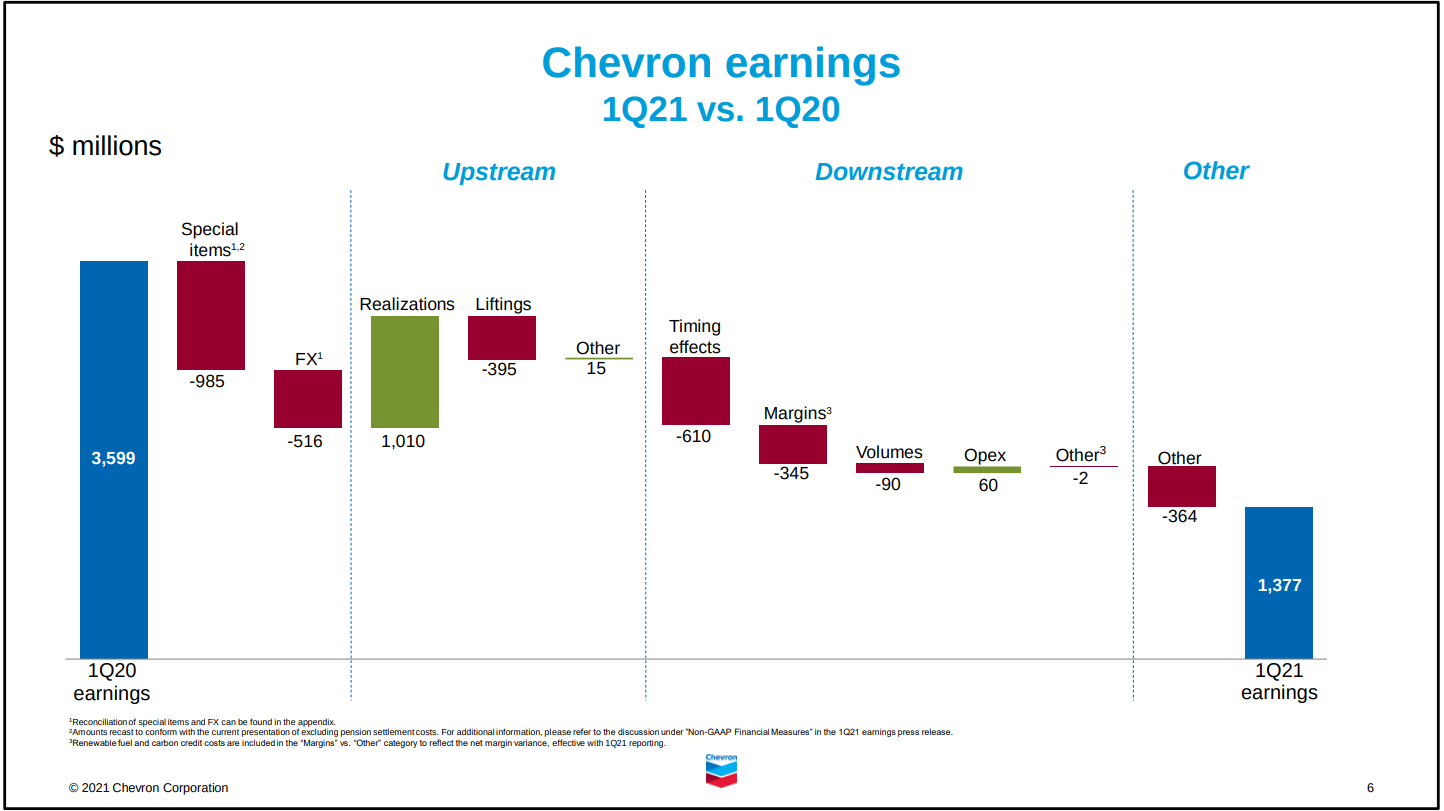 Chevron Corp's first-quarter profit fell 29% compared with the same period a year ago as gains from oil and gas prices were undercut by weaker refining margins, production losses and the impact of an asset sale that benefited results last year.

Oil companies are generally enjoying a recovery in energy prices, up at least a third this year, after the pandemic hammered demand at the start of 2020. Chevron and its peers slashed spending, paving the way for several firms to post sharply better results.

"Results were down from a year ago due in part to ongoing downstream margin and volume effects resulting from the pandemic and the impacts of winter storm Uri," said Michael Wirth, Chevron's chief executive officer.

Chevron, the second-largest U.S. oil producer, reported a profit of $1.72 billion, or 90 cents per share, compared with $2.45 billion, or $1.31 per share, a year earlier. Year-ago results included about $680 million in asset sales and favorable tax items.

Chevron's cash flow from operations, at $4.2 billion, was more than $1 billion below Wall Street forecasts, according to Refinitiv IBES data. Its expenses for debt costs, employee pension and benefits more than doubled to $978 million.

Chevron's refining eked out a $5 million profit, down from $1.1 billion a year ago, as the pandemic continued to mute demand for jet fuel, diesel and gasoline and the winter storm hurt U.S. operations.

Earnings from oil and gas production fell 20% despite price gains as non-U.S. operations suffered from declining volumes, foreign currency impacts and the absence of an asset sales gain. The unit benefited from higher oil volumes from the acquisition of Noble Energy in October.

Chevron said capital spending for the first quarter was $2.5 billion, down from $4.4 billion in the same period last year.

The company will restrain spending this year, including in U.S. shale. "The stock markets are not sending a signal to us or our sector to increase capital," Breber said.

Chevron is looking toward a "sustained global recovery" before increasing activity, Breber said, adding that OPEC and allies are easing their oil production curbs.