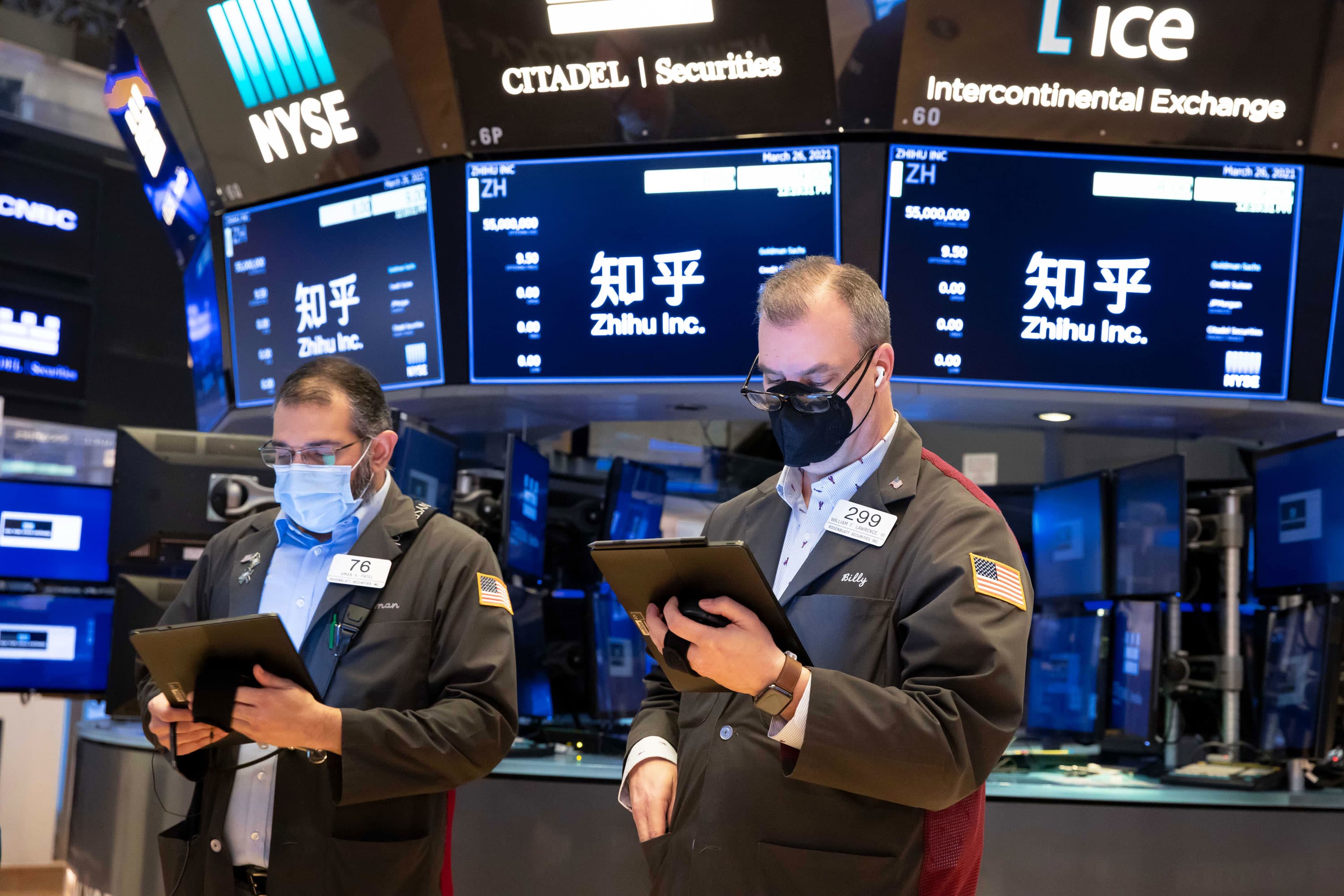 U.S stocks dipped on Thursday following a strong day of gains as the market appeared stuck in a trading range with traders turning a blind eye on solid earnings and economic data.

The S&P 500 fell 0.3%, dragged down by energy and materials. The Dow Jones Industrial Average dipped 150 points, while the Nasdaq Composite traded 0.2% lower.

Shares of Southwest Airlines rose 0.8% after the carrier said leisure travel bookings continue to rise and that it expects to break even “or better” by June. Southwest also posted a narrower-than-expected loss for the first quarter.

Dow Inc. fell more than 4% even after the chemicals company topped earnings and revenue estimates for the first quarter. The stock is still up more than 10% for 2021.

The market remained lower after a better-than-expected reading on weekly jobless claims. The Labor Department said Thursday that first-time claims for unemployment insurance totaled 547,000, which was below the Dow Jones estimate for 603,000.

So far companies have largely topped Wall Street expectations this earnings season, but strong first-quarter results are not lifting the market higher after a run to records pushed valuations near multiyear highs.

“The streak of strong positive EPS surprises is likely to continue, but elevated valuations have now become pervasive; sentiment is too optimistic; and a potential change in corporate taxation is an overhang,” Maneesh Deshpande, head of equity derivatives strategy at Barclays, said in a note.

Nonetheless, the firm raised its year-end S&P 500 target to 4,400, which would translate into a 6% gain from here. Barclays cautioned that further upside is unlikely.

American Airlines erased earlier gains and turned negative even after the company said its cash flow turned positive by the end of the quarter, excluding debt payments.

Stocks rose on Wednesday to snap a two-day losing streak as companies tied to the economy reopening led the way higher. The Dow advanced 316 points, or 0.93%, while the S&P 500 rose 0.93%. The Nasdaq Composite was the relative outperformer of the major indices, rallying 1.19%.

Small caps were a particular point of strength during the session, with the Russell 2000 ending the day 2.35% higher for its best day since March 1.

The Dow and S&P 500 are less than 1% away from reclaiming their record highs, reached last Friday, amid ongoing optimism over the pace of the economic recovery.

“Stocks continue to fire on almost ‘all cylinders’ and remain in a strong position as the bull expands across the cyclical, secular, and increasingly the defensive [sector] with an economy on the offensive,” noted strategists at Evercore ISI. “The sum of which in conjunction with rising metals and materials, a milquetoast dollar, and a 10-year at 1.55%, offers the technical definition of ‘Goldilocks’ as we consolidate the powerful rally atop key support,” the firm said.

Cathie Wood loves the setup for her stocks after sell-off, expects big returns from her strategies

Cathie Wood, founder of Ark Invest, said Friday that the pullback in technology stocks is not a cause for concern, and that her long-term bets will pay off over time. “I love this set up,” she said Friday on CNBC’s “Closing Bell.” “The worst thing that could have happened...

Stocks rose to record levels on Friday even after a disappointing April jobs report as the weak number made investors believe easy monetary policies that powered the market’s historic rebound will stay in place for longer. The S&P 500 climbed 0.9% to hit a intraday record high. The Dow...

Cathie Wood loves the set-up for her stocks after sell-off, expects big returns from her strategies

Cathie Wood, CEO and founder of ARK Invest. CNBC Cathie Wood, founder of Ark Invest, said Friday that the pullback in technology stocks is not a cause for concern, and that her long-term bets will continue to move higher. “I love this set up,” she said Friday on CNBC’s...