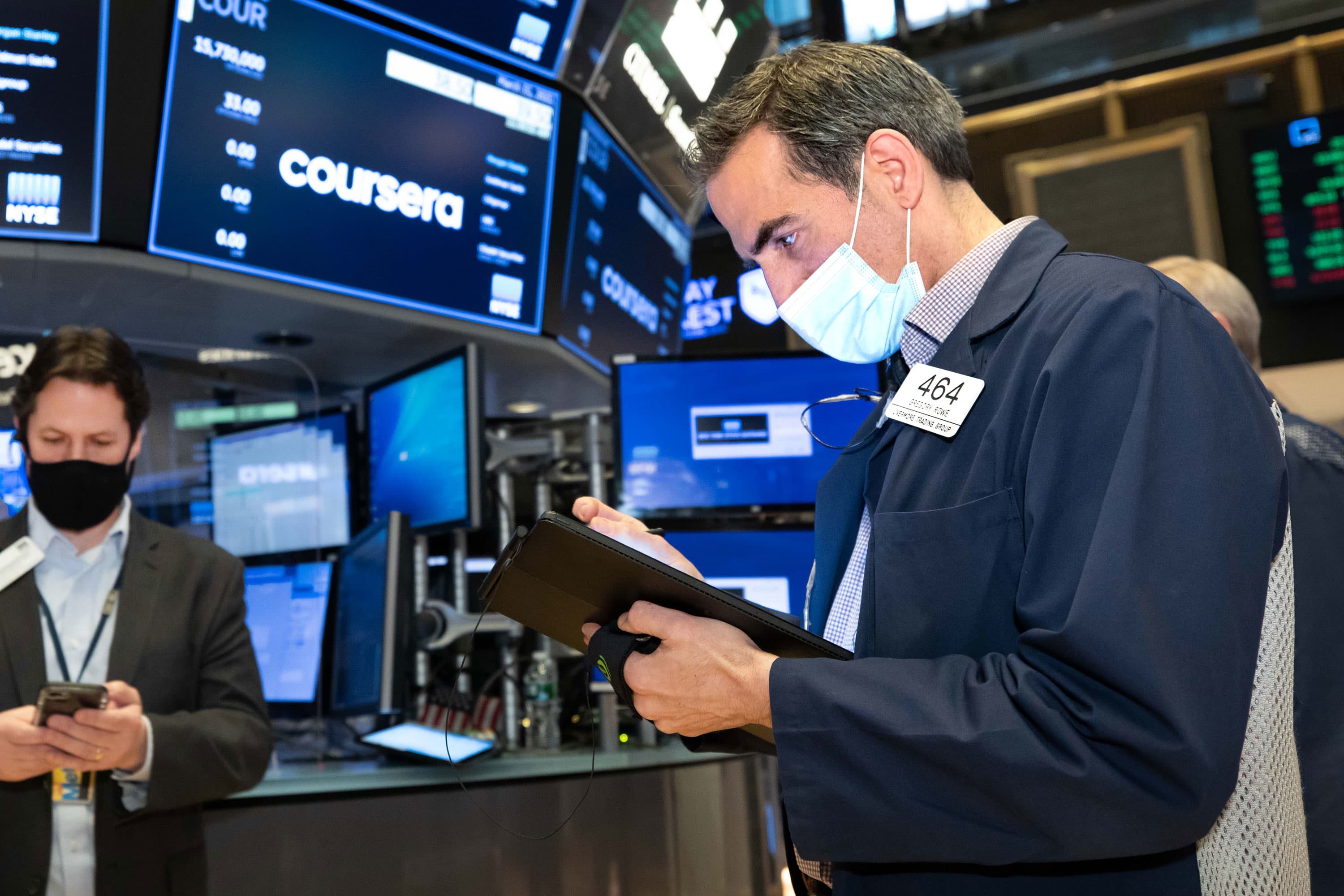 U.S. stocks fluctuated on Tuesday after the Dow Jones Industrial Average and the S&P 500 both closed at record highs in the prior session as strong economic data boosted hopes of a smooth recovery.

The blue-chip Dow dipped 100 points, while the S&P 500 traded near the flatline. The tech-heavy Nasdaq Composite traded 0.2% higher.

The Labor Department said Tuesday U.S. job openings rose 268,000 to a two-year high of 7.4 million on the last day of February, according to its monthly Job Openings and Labor Turnover Survey, or JOLTS report. Economists polled by Dow Jones were expecting a total of 7 million.

The data came after Friday’s blowout jobs report and a surge in the gauge of services industry activity showed the economic rebound gained momentum amid accelerated vaccine rollout.

“Markets today are also still digesting a ‘trifecta’ of strong start-of-the-month reports,” Chris Hussey, a managing director at Goldman Sachs, said in a note. “But even on the back of all of this good news, with the S&P 500 already up 8.5% ytd, today is a time for markets to ‘consolidate’ as they await the next batch of news — 1Q21 earnings season.”

Big banks including JPMorgan and Goldman Sachs kicked off the new earnings season next week. First quarter earnings are expected to be up 24.2% year-over-year, compared to a 3.8% growth in the fourth quarter, according to Refinitiv.

“I think the higher bond yields are quite understandable in the context of the improvement in the economic outlook. The increase has been an orderly increase,” Mester said. “So I’m not concerned at this point with the rise in yields. I don’t think there’s anything for the Fed to react to.”

On Tuesday, California Governor Gavin Newsom said that the state will reopen its economy by June 15 provided that coronavirus vaccine and hospitalization cases remain stable.

“Vaccinations are rolling out at a record clip, and historic stimulus efforts from Congress have all paved the way for continued positive market momentum,” said Chris Larkin, managing director of trading and investing product at E-Trade Financial.

Investors continue to assess President Joe Biden’s $2 trillion infrastructure proposal announced last week and its chance to become reality. While politicians on both sides of the aisle support funding to rebuild American roads and bridges, disagreements over the ultimate size of the bill and how to pay for it remain, including Biden’s plan to raise the corporate tax to 28%.

Biden said Monday he is not worried that a corporate tax hike would hurt the economy. Conservative Democrat Sen. Joe Manchin of West Virginia reportedly said he opposes the proposed tax hike to a level that high.

Dow jumps nearly 300 points to a record high, gains 2% for the week

U.S. stocks climbed to record levels and closed out Friday at their session highs as Wall Street wrapped up the week with solid gains amid rising reopening optimism. The Dow Jones Industrial Average rose 297.03 points to 33,800.60, notching a record closing high. The S&P 500 gained 0.8% to...

U.S. stocks continued to hit record highs on Friday as Wall Street is set to wrap up the week with solid gains. The S&P 500 inched up 0.5% after notching a record closing high in the previous session. The Dow Jones Industrial Average rose 200 points to an all-time...

Dow climbs 150 points to another record high, on pace for a winning week

U.S. stocks continued to hit record highs on Friday as Wall Street is set to wrap up the week with solid gains. The S&P 500 inched up 0.3% after notching a record closing high in the previous session. The Dow Jones Industrial Average rose 150 points to an all-time...