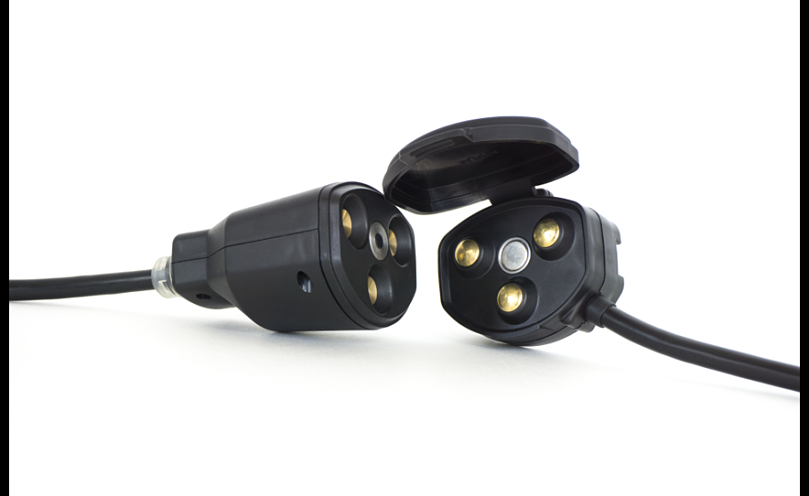 They say that it’s tough to invent a better mousetrap, but there have been improvements that made them better. What has happened to the lowly electrical plug since Harvey Hubbell first patented the pronged plug design in 1904?

There have been iterations and marked improvements over the years like adding a ground pin, GFCI, AFCI, the incorporation of tamper resistant sliders, etc… but has anything really changed from the ubiquitous prongs that go directly into an electrical charge to power everything we hold dear?

The answer is yes, and the world will see this change soon thanks to a Vancouver startup.

The innocuous taken-for-granted electrical plug has been a major item to blame for thousands of accidents over the years from tripping, house fires caused by electrical fires (67%) and over 30,000 people who have reported being shocked from electrical outlets (and a whole lot more who don’t report). There had to be a better way.

Have you ever had the urge to stick your fingers into that wall plug just to see what 120 volts feel like? Probably not, but I’ve bought those little plastic plug protectors that plug the holes in the wall socket just to keep the urge from overwhelming me. There has been a quiet revolution in home safety and its origins come from a Vancouver startup and its patented technology that will forever change how we currently connect to electricity.

VoltSafe has patented a safe, extremely convenient smart plug using the science of Magnetic Actuation and Resistive Sensing that will transform how we connect to electricity. They call it “disruptive technology that does not disrupt your lifestyle.” It sounds all very high tech and it is. Gone are the usual 2 or 3 prongs, one wide neutral, one smaller hot, with possibly one round ground, now replaced by a flat receptacle with circular contacts that couples magnetically with an appliance with a similar configuration (or with an VoltSafe adapter).

VoltSafe’s patented technology utilizes a unique handshake matching protocol that results in outlets only allowing electricity flow when properly connected and remaining completely safe when disconnected. Instead of prongs being jammed deep into outlet holes, VoltSafe’s technology utilizes permanent magnets to hold plug/outlet together. Electricity flow turns on/off in less than 9 milliseconds. The plug is not hot, until the other half of the plug is fully connected. The plug itself has a futuristic circuit, relays for the patented technology and a PCB board. It’s really a Smart Plug by design and brings electrical plug design and function into the 21st century, not just here in North America, but worldwide.

I asked VoltSafe’s CEO, Trevor Burgess, if this was another example of an IoT (internet of things) device that runs our refrigerators, cars and who knows what else. He smiled and told me this not only does what a smart device does but also adds additional layers of functionality and security. It also detects, delivers and manages different types of loads and currents (AC/DC) automatically. Imagine going to any of the outlets in your home and no matter what you plug in, the outlet will sense and deliver the appliance (fan, phone, tv, computer, hairdryer) the correct voltage, amperage and automatically deliver AC or DC, without the need for AC/DC brick adapters you see everywhere today. Seriously? No more proprietary Apple plugs? Thank you!

Burgess told me that the plug has inherent security features. Rather than relying on wireless technology alone, the outlet is hardwired to the electrical grid which enables you to communicate over power line between your outlets — which, in turn, enables users to be off the grid. IoT devices, in contrast, wirelessly broadcast, which leaves them at severe risk to unwanted outside hacks. Moreover, VoltSafe’s system can easily troubleshoot the entire house to diagnose any issues with the power grid.

So It’s a smart plug, cool! Burgess said, “All VoltSafe plugs are smart by default and have the ability to enable app control, power metering, load factor detection, AFCI, GFCI and even AI.“ Sounds easy!

Once you get past the concept, the tech and the patents, reality sets in when you ask how one retrofits all the homes with this new plug system since the world has essentially had the same system since Thomas Edison first brought electricity into our homes in 1879. Well the world is changing to smart homes and this is a new iteration, one that provides a big level up on safety and ease of use along with it.

You would think retrofitting older homes might be difficult but the first home design they plan to bring to market doesn’t even require the services of an electrician. Instead, all you need to do is take a flat screwdriver and remove the outlet faceplate, and then “sleeve” the VoltSafe product and refasten with the same screws! Newer homes may also welcome the change. Hmm, then there is the appliance plug, that needs to be redesigned (using their proprietary technology) or retrofitted. When I asked Mr. Burgess about these potential hurdles, he said, “We design our plug technology in a way that put all of the integrated components and cost within the outlet. As such, the adapter side where you plug in your pronged appliances has nothing more than a fingerprint embedded which enables VoltSafe to create and retrofit for around $0.10/adapter. That said, for new disruptive technology, market adoption is always the biggest challenge”. I guess change needs to be slow and deliberate.

For anyone living in a colder climate, starting your car in the morning is a pain without an engine block heater. VoltSafe’s engineer Arash Janfada, a civil engineer, ripped his block heater cable from his truck one morning and figured there had to be a better way. He designed a new block heater. VoltSafe calls this their “beachhead product” that has the magnetic technology built into it. It’s a little larger than the average plug so they had more room to make iterations on the original device while making a viable product for the market.

Block heaters are notorious for being dangerous, prone to the vagaries of the environment, e.g., road salt and dirt, and they are hard to pull apart in the morning. VoltSafe found a test market this winter with Canadian company Federated Coop through which the company figures it will sell around 8000 units this season. Another big box Canadian retailer reached out to white-label the device that will hit its 500+ stores next year.

Burgess, among other skills, is a supply chain management expert, so he’s figured out how to manage all of the units he expects to sell in 2020 and beyond.

While VoltSafe is not about to lose its focus on proving the efficacy of the main plug product, the company’s block heater is the first product generating momentum and sales. VoltSafe spends a considerable amount of time and money on intellectual property development and protection and research work and has close relationships with universities. With the block heater product hitting the market first, the company will be able to prove the certifiability to their co-partners.

VoltSafe already has its sights on other applications including electric vehicles, marine shore power and home outlets. In all cases, the plugs become a universal fit so there is no need for converters. The circuits inside each plug easily adapt to the current that the car or device requires.

VoltSafe’s go-to-market strategy is to get the block heater product out there, certify it and then send the prototypes of the other IPs to partners for commercialization. The company’s idea of working with established partners in each industry allows it to bypass the adoption problems that this type of IP will create. It will be primarily a B2B model where its continuous R&D will enable VoltSafe to retain upwards of 90% of the IP. Iterate on the fly!

VoltSafe knows its first product is in demand. In a Google survey, 46% of respondents admitted they had driven away with the block heater plugged in, 60% said they wanted a safer, easier connection and 83% of people regularly plugged their vehicle into a block heater overnight. 35.6% of respondents stated they would pay $119 for an engine block heater extension cord that magnetically connected/disconnected and also had an APP controlled timer included. The added benefit? It saves about $71/month in energy costs.

Using a Kickstarter campaign, VoltSafe secured 365 pre-orders and has over 2000 preorders from its website. The company has secured a deal to provide Royal Canadian Mounted Police vehicles across Canada with the heater and has secured distribution at Federation Coop’s 360 stores. Not bad!

VoltSafe is in the middle of a C$2.5 million seed round with the current second tranche at $1.5 million at a pre-money valuation of C$12 million.

The company has some powerful partners lined up for its products, but because the product is so different from the 140-year-old pronged plug standard, there are no certification standards that exist. So in the last four years, the company has fought the David and Goliath battle with certification bodies to enable VoltSafe technology to have a path to certification. Since the first product getting certified is the engine block heater product, this will be the one that shows that VoltSafe technology takes certified/compliant plug technology into the 21st century, paving the path for partners to utilize for all other application uses.

Gary is a Startup Specialist, CEO of Bizzo Management Group Inc. and Bizzo Integrated Marketing Corp. in Vancouver. London-based Richtopia placed Bizzo on the Top 100 Global Influencers in the World for 2018. He is an Adjunct Professor of Integrated Marketing & Consumer Behavior at the New York Institute of Technology, MBA School of Management (Vancouver Campus).