New York is one of only 18 states where cases have not risen greatly over the past two weeks, according to a Reuters analysis. However, New York City Mayor Bill de Blasio said on Sunday he is moving to shut non-essential businesses as well as schools in nine neighborhoods, starting on Wednesday. The lockdown would require the governor’s approval.

Health experts have long warned that colder temperatures driving people inside could promote the spread of the virus. Daytime highs in the upper Midwest are now in the 50s Fahrenheit (10 Celsius).

Montana has reported record numbers of new cases for three out of the last four days and also has a record number of COVID-19 patients in its hospitals.

Wisconsin has set records for new cases two out of the last three days and also reported record hospitalizations on Saturday. On average 22% of tests are coming back positive, one of the highest rates in the country.

North Dakota, South Dakota and Wisconsin have the highest new cases per capita in the country. 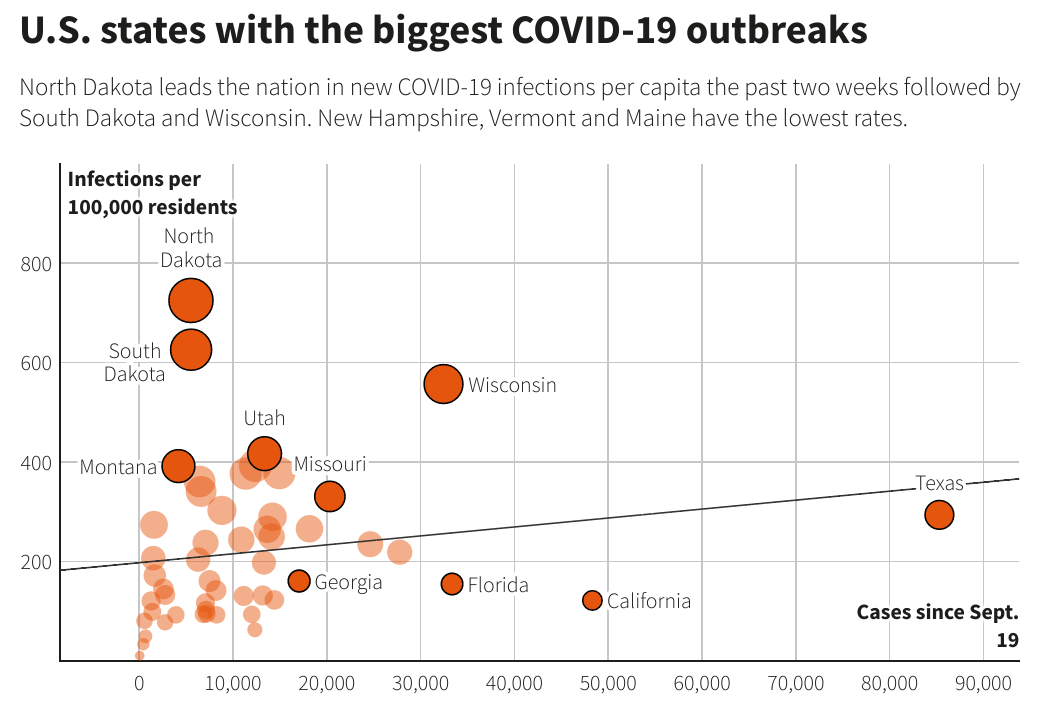 Wisconsin Senator Ron Johnson is one of several prominent Republicans who have tested positive for coronavirus since President Donald Trump announced he had contracted the virus.

Because of the surge in cases in the Midwest, nursing homes and assisted-living facilities operated by Aspirus in northern Wisconsin and Michigan are barring most visitors as they did earlier this year.

Bellin Health, which runs a hospital in Green Bay, Wisconsin, said last week its emergency department has been past capacity at times and doctors had to place patients in beds in the hallways.

The United States is reporting 42,600 new cases and 700 deaths on average each day, compared with 35,000 cases and 800 deaths in mid-September. Deaths are a lagging indicator and tend to rise several weeks after cases increase.

Kentucky is the first Southern state to report a record increase in cases in several weeks. Governor Andy Beshear said last week was the highest number of cases the state has seen since the pandemic started.

State health experts have not pinpointed the reason for the rise but point to fatigue with COVID-19 precautions and students returning to schools and colleges. Over the last two weeks, Kentucky has reported nearly 11,000 new cases and has seen hospitalizations of COVID-19 patients rise by 20%.

Reporting by Lisa Shumaker in Chicago; Editing by Steve Orlofsky.