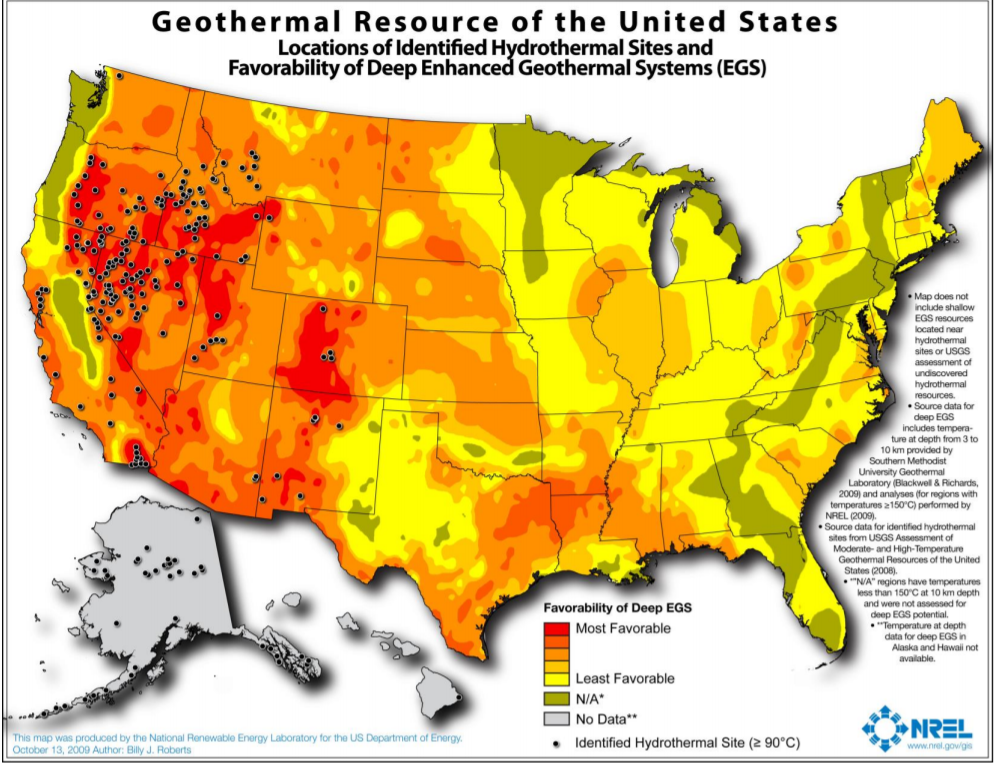 The amount of heat within 10,000 meters (6.2 miles) of the earth’s surface is estimated to contain 50,000 times more energy than all the oil and gas resources worldwide, according to Jeremy Shere in his book, Renewable. Still, geothermal energy only represents a fraction of the actual electricity used by Americans. The Department of Energy recently conducted an in-depth task force analysis to evaluate the potential of geothermal resources across the country. The summary report, GeoVision: Harnessing the Heat Beneath Our Feet, concluded geothermal energy could produce the energy equivalent of 28 million households (almost enough to power the entire state of Texas), and geothermal district-heating systems could experience exponential growth—from 21 installations today to 17,500 nationwide.

One of the most valuable uses for geothermal energy is the flexibility it can provide to the power grid through ancillary services by responding to changes in electrical load and even supporting reliable grid operation, according to the Geovision report. To this point, an important advantage of geothermal energy, according to The International Renewable Energy Agency, is that the resource offers around-the-clock, year-round availability, whereas solar and wind can have high variability and intermittence. Furthermore, geothermal power plants have a small environmental footprint using less land than coal, wind and solar resources, according to the Department of Energy’s website.

Ormat Technologies is the clear market leader in geothermal energy technology with more than 150 geothermal power plants capable of generating 917 megawatts (MW). Ormat is the only vertically integrated company with a portfolio that is 94% geothermal.

Established in 1965, Ormat started as a turbine and remote power unit (RPU) manufacturer, even working on the Trans-Alaska Pipeline project in the 1970s. In the 1980s, Ormat focused on geothermal energy projects, purchasing power plants in Nevada and California. Today, most of the company’s MW production comes from the United States, but Ormat has operations spread out across the globe, including Kenya, New Zealand, Indonesia, Guatemala and Honduras.

Showing resilience after a disaster

This energy mix enabled the company to endure the loss of revenues caused by the eruption of Hawaii’s shield volcano, Kīlauea, in May 2018. Ormat’s Puna Geothermal Venture plant—only a few hundred yards from the active fissure—has been shut down since the eruption. The plant had been producing 25% of the Big Island’s power.

Remarkably, even with the business interruption, Ormat has still increased its electricity generation numbers year-over-year by 4.9%, according to data in its Q3 2019 earnings report, and the company finally has the plant ready for restart. CEO Isaac Angel spoke about Puna in detail on the Q3 2019 earnings call in early November last year.

We expect to be able to sell electricity produced at Puna as soon as the relevant permits required from local authorities for the operation of the substation and transmission network pathways being undertaken by our partners in Hawaii. These are expected by the end of Q1 2020. In addition, we have recovered several injection wells…rig drilling of existing wells, clean outs and drilling of new wells. We expect to gradually increase the power plant generation capacity as we complete well drilling work in the target of a gainful operation by the end of the second quarter of 2020.

Restoring the revenues of the Puna Plant will be a positive catalyst for Ormat. On January 6, 2020, the company announced the power plant and Hawaiian Electric’s Hawaii Electric Light subsidiary reached an amended power purchase agreement. The new deal extends until 2052, increasing contract capacity to 46 MW at a fixed price of $70 per MW hour. “According to the amended PPA, we expect the total revenue from energy and capacity payments, including the new 8 MW generating capacity, to be approximately 5% to 7% higher than the prior levels before the eruption,” Mr. Angel said in the announcement.

Additionally, the company mentioned it was receiving insurance payments for the damage done to the power plan. A few insurers rejected the company’s business interruptions claims, but Ormat filed lawsuits against those carriers. As of September 30, 2019, Ormat’s total claims were $56.7 million, of which it had received $21.1 million.

Positive developments in California for Ormat

The Golden State is looking to go 100% renewable energy by 2045, and projects around the state have already started taking shape for Ormat.

In January 2020, Ormat signed 10-year power purchase agreements with Silicon Valley Clean Energy and Monterey Bay Community Power for a total of 14 MW from its 30 MW Casa Diablo-IV (“CD4”) geothermal plant in Mammoth Lakes. CD4 will be the first geothermal power plant built within the California Independent System Operator (ISO) balancing authority in the last 30 years. The California ISO oversees the operations for the bulk electric power system in the state. The CD4 plant will also be the first in Ormat’s portfolio that will sell its output to Community Choice Aggregators, which enable allow local governments to procure power from an alternative supplier while still receiving transmission and distribution service from their existing utility provider.

Helping to bring plant construction costs down is the extension of the full Production Tax Credit (PTC), which includes a credit for each kilowatt-hour of energy produced by the taxpayer from a qualified renewable energy source. Geothermal energy counts as a qualified renewable energy, and when the US House of Representatives passed the tax extenders passage on December 19, 2019, it enabled construction projects started in 2020 to claim PTCs.

“We commend the extension of the PTC available for geothermal, which helps level the playing field with other technologies and provides predictable market signals for project development. This, in turn, helps leverage private investment to create new Jobs and drive economic benefits across the country.” 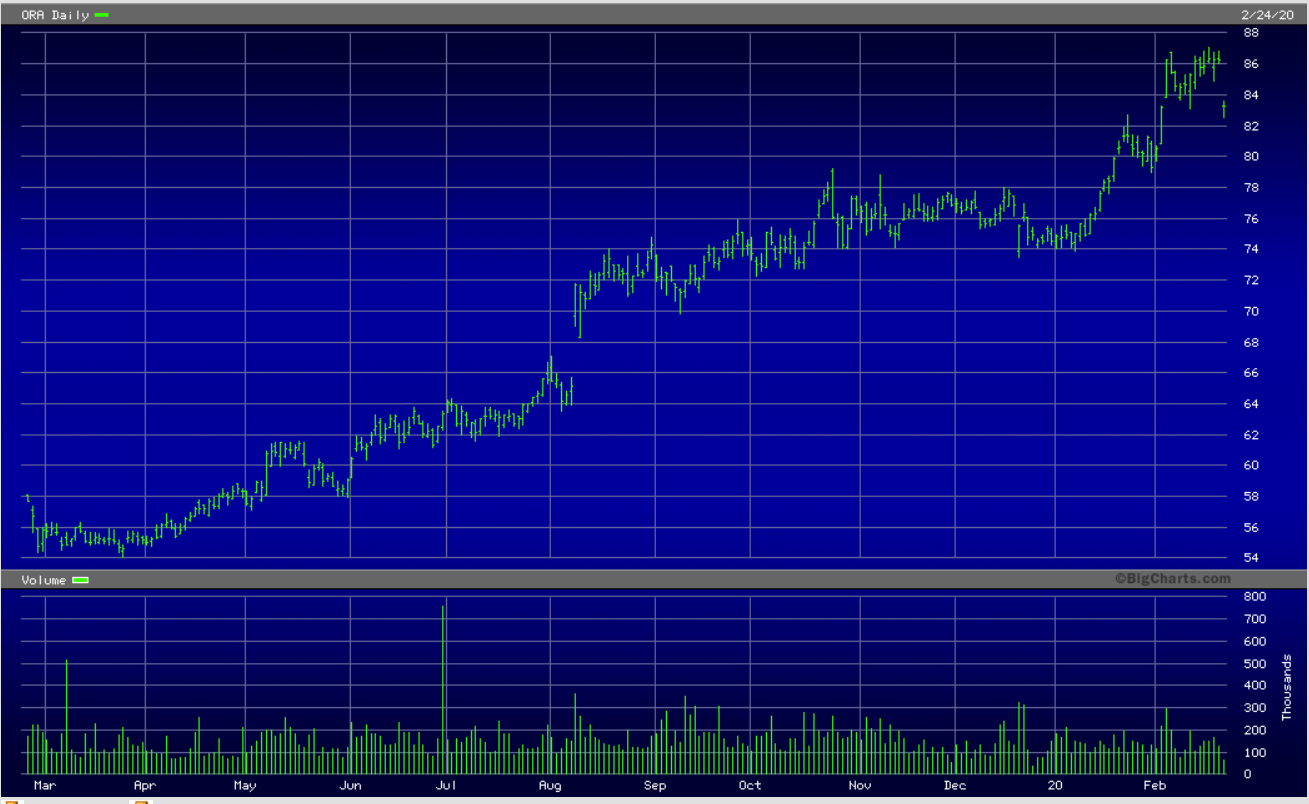 Ormat will present its fourth quarter and year-end 2019 financial results tomorrow after the market closes. In Q3 2019, Ormat booked total revenues of $170.5 million, up 2.4% compared to the same quarter in 2018. Consolidated gross margin was 32.5% compared to 29.3% in the same quarter last year, while gross margin for the electricity segment expanded year-over-year 35.4%.

In the Geovision report, the lag in available technology was one potential hurdle to the growth of geothermal energy. Ormat represents a tested company with proven technology in the sector that is growing. The company said in a Q3 2019 presentation that it plans to add between 120 MW and 135 MW by the end of 2021. Investors seem to be taking note of the Reno, Nevada-based company as its share price has increased 49.6% over the last year compared to the S&P 500’s 20.6%.