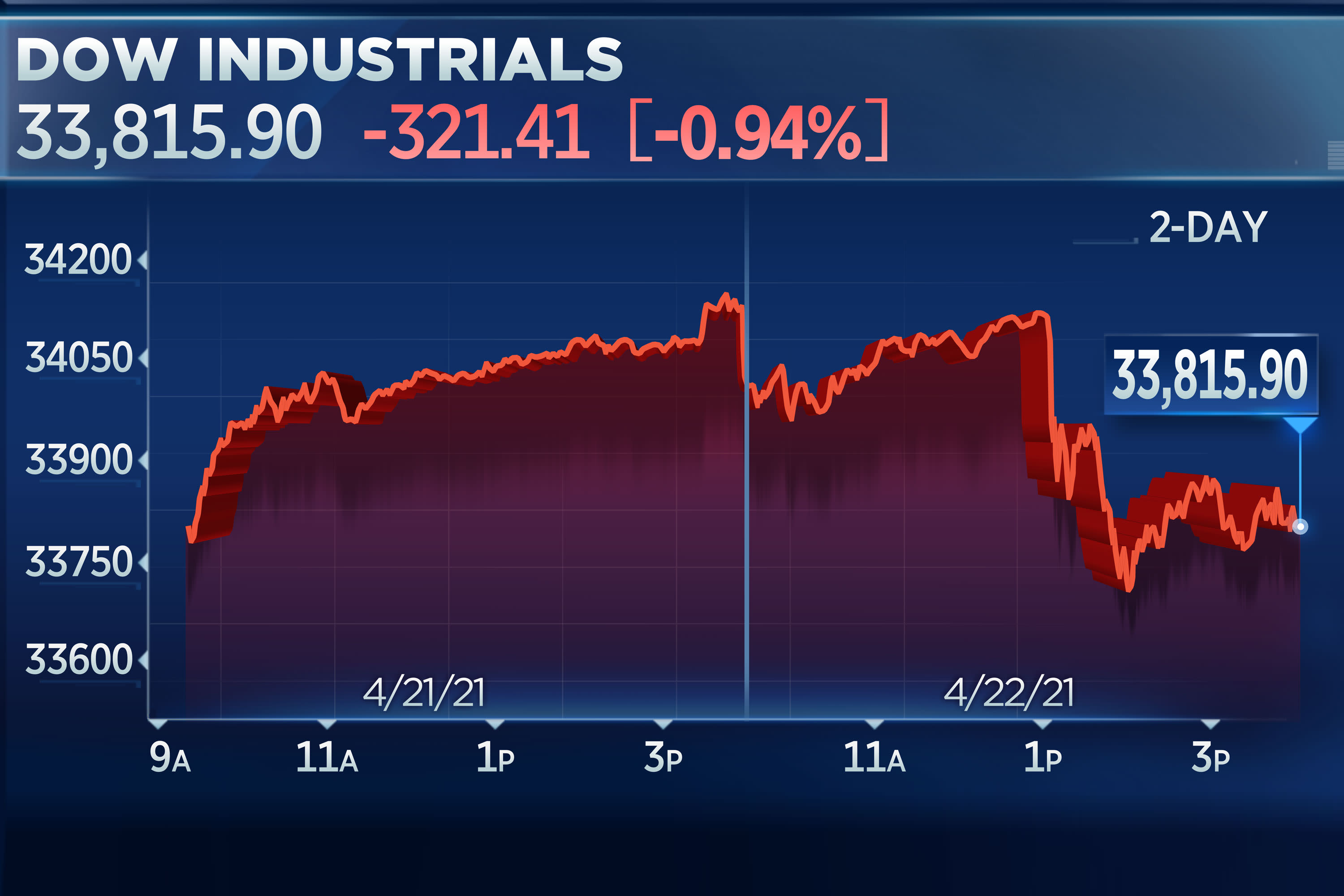 U.S stocks fell to session lows in a swift fashion on Thursday after a report that President Joe Biden is slated to propose much higher capital gains taxes for the rich.

The Dow Jones Industrial Average dropped 400 points to its low of the day. The S&P 500 erased earlier gains and fell 1%, while the Nasdaq Composite slid 1.1%.

Bloomberg News reported Thursday afternoon that Biden is planning a capital gains tax hike to as high as 43.4% for wealthy Americans. The proposal would hike the capital gains rate to 39.6% for those earning $1 million or more, up from 20% currently, according to Bloomberg News, citing people familiar with the matter.

Growth stocks, which could come under selling pressure on higher capital gains taxes, led the intraday decline on Thursday with shares of Tesla and Amazon falling. The iShares S&P 500 Growth ETF fell 0.5%, more than its value counterpart.

“Markets are highly concentrated in small number of growth names,” said Mark Yusko, CEO & CIO of Morgan Creek Capital Management. “Those stocks have driven most of the gains over past few years and many investors have significant gains at current prices. Fear of higher capital gains rate could motivate selling of those names and trigger market correction, so some investors will try and front run that potential move by selling or hedging through short selling.”

Before the news hit, major averages were trading slightly higher as investors sifted through corporate earnings and economic data.

Shares of Southwest Airlines rolled over and traded in the red after the carrier said leisure travel bookings continue to rise and that it expects to break even “or better” by June. Southwest also posted a narrower-than-expected loss for the first quarter.

Dow Inc. fell more than 5% even after the chemicals company topped earnings and revenue estimates for the first quarter. The stock is still up more than 10% for 2021.

Investors also digested a better-than-expected reading on weekly jobless claims. The Labor Department said Thursday that first-time claims for unemployment insurance totaled 547,000, which was below the Dow Jones estimate for 603,000.

So far, companies have largely topped Wall Street expectations this earnings season, but strong first-quarter results are not lifting the market higher after a run to records pushed valuations near multiyear highs.

“The streak of strong positive EPS surprises is likely to continue, but elevated valuations have now become pervasive; sentiment is too optimistic; and a potential change in corporate taxation is an overhang,” Maneesh Deshpande, head of equity derivatives strategy at Barclays, said in a note.

Nonetheless, the firm raised its year-end S&P 500 target to 4,400, which would translate into a 6% gain from here. Barclays cautioned that upside beyond its target is unlikely.

Also on Thursday, the Republican party set forth their counter offer to Biden’s $2 trillion infrastructure plan. The senators proposed a $568 billion framework that includes funding for bridges, airports, roads and water storage. It does not include tax increases.

Dow rises 100 points to another record, but sell-off in Big Tech drags Nasdaq down 2%

The Dow Jones Industrial Average climbed to another record high on Monday as investors dumped Big Tech stocks and bet on companies leveraged to a strong economic comeback.The divide between value parts of the market and growth was significant with the tech-heavy Nasdaq Composite losing 2% as the Dow...

Is a $300 unemployment boost holding back jobs? Yes and no

Gov. Asa Hutchinson said Arkansas will end enhanced unemployment benefits June 26. Andrew Harrer/Bloomberg via Getty Images Tensions are flaring over a $300 supplement to weekly unemployment benefits. A weaker-than-expected April jobs report has led to outcry in some circles that the payments are fueling a labor shortage. The...

Dow climbs 250 points to another record, but sell-off in Big Tech drags Nasdaq down 1.5%

The Dow Jones Industrial Average climbed to a record high on Monday amid strong gains in energy stocks, building on the benchmark’s recent strong rally. Big Tech stocks came under pressure, however, weighing on the Nasdaq Composite. The blue-chip gauge popped 250 points to a intraday record high, boosted...