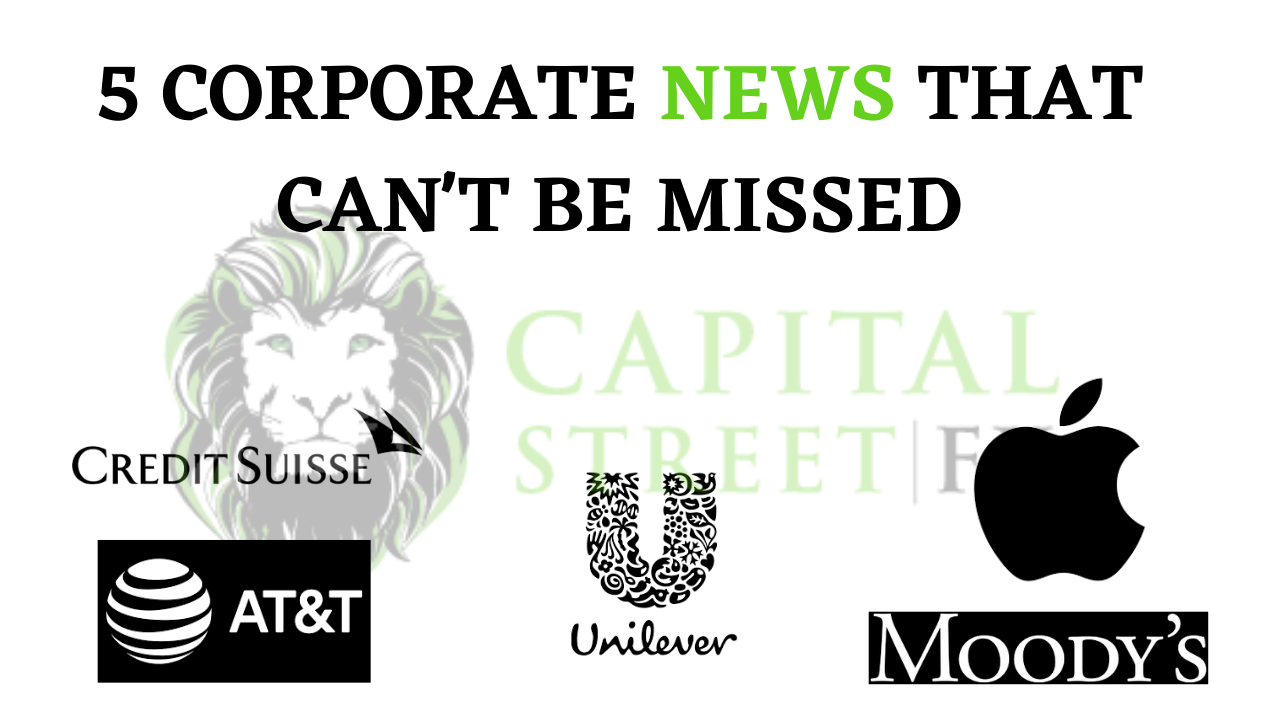 1.CREDIT SUISSE:– Credit Suisse  Chairman Antonio Horta-Osorio has quit following an internal probe into his personal conduct, including breaches of COVID-19 rules, raising questions over the embattled lender’s new strategy as it tries to recover from a string of scandals.

His exit comes less than a year after he was hired to help the bank deal with the implosion collapsed investment firm Archegos and the insolvency of British supply chain finance company Greenshill Capital, even as it was still reeling from the 2020 exit of CEO Tidjane Thiam over a spying scandal https://www.reuters.com/article/us-credit-suisse-spying-ceo-idUSKBN2010L3.

Combined these triggered multi-billion dollar losses and sackings at Switzerland’s No.2 bank, and Horta-Osorio unveiled a new strategy in November to rein in its investment bankers and curb a freewheeling culture.

However, the Portuguese banker’s personal conduct has recently come under scrutiny, after he breached COVID-19 quarantine rules https://www.reuters.com/business/exclusive-credit-suisse-finds-second-breach-covid-19-rules-by-chairman-sources-2021-12-29 twice in 2021.

“I regret that a number of my personal actions have led to difficulties for the bank and compromised my ability to represent the bank internally and externally,” Horta-Osorio said in a statement issued by Credit Suisse on Monday.

2.MOODY’S: -Ratings agency Moody’s  Investors Service on Sunday placed all ratings and assessments of the consumer banking arm of Citigroup in Mexico on review for downgrade.

In a statement, Moody’s said the review was triggered by Citigroup’s announcement that it would sell its Citibanamex https://www.reuters.com/business/citi-exit-mexican-consumer-banking-business-strategy-revamp-2022-01-11 consumer banking operations, which will end a two decade retail presence in Mexico.

All ratings and assessments were on review, except the bank’s short-term Mexican National Scale deposit rating of MX-1, Moody’s said.

“Moody’s placed Citibanamex’s ratings and assessments on review for downgrade in order to incorporate the uncertainties that will come out of this divestiture and the implications on the bank’s standalone credit profile,” the credit agency said.

Unilever and GSK did not immediately respond to Reuters’ requests for comment.

Unilever could eventually sell some non-core assets from the GSK portfolio to buyers including private equity firms, which could help fund an acquisition, the Bloomberg report added.

4.APPLE: -Apple  said on Saturday it would allow developers of dating apps in the Netherlands to offer non-Apple payment options to their users, complying with an order from the country’s market regulator to do so by Jan. 15 or face fines.

The country’s Authority for Consumers and Markets found in a decision published on Dec. 24 that Apple had abused its market position by requiring dating app developers, including Tinder owner Match Group Inc , to exclusively use Apple’s in-app payment system.

Apple’s practice of requiring developers to use its system and pay commissions of 15-30% on digital goods purchases has come under scrutiny from regulators and lawmakers around the world, but the Dutch ruling applies only in the Netherlands and only for dating apps.

In a post on its developers’ blog on Saturday, Apple said it would comply with the decision and introduce “two optional new entitlements exclusively applicable to dating apps on the Netherlands App Store that provide additional payment processing options for users”.

The auction generated proceeds of $22.5 billion in total, the FCC said. T-Mobile won $2.9 billion while Weminuche LLC won $7.3 billion, which some analysts and FCC documents suggest bid on behalf of Dish. Dish, which did not immediately comment Friday, confirmed in November it had filed to participate in the auction.

The FCC said over one-third of the top 100 markets have at least four winning bidders, a broader ranger than a prior auction. The broader range and distribution of winning bidders “will increase competition by providing a diversity of wireless carriers with the midband spectrum resources needed to maintain American leadership in 5G,” it said.