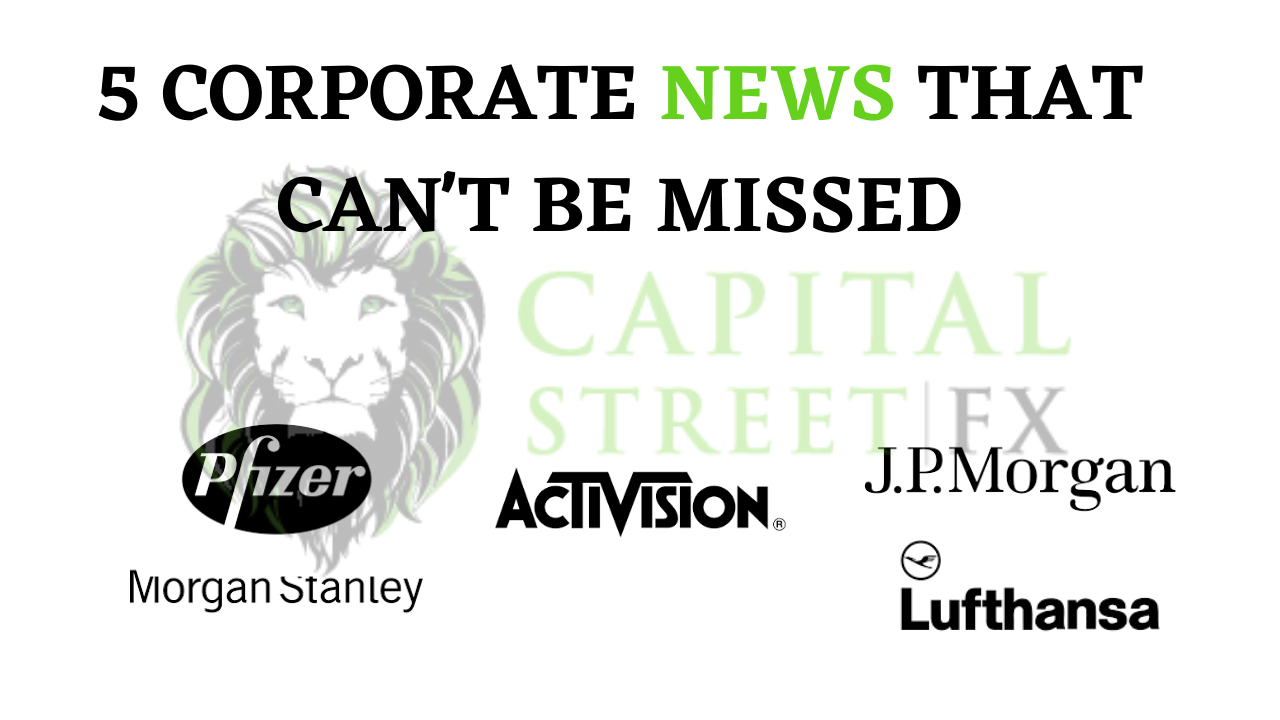 Pfizer/BioNtech’s COVID-19 vaccine has shown to be effective against severe disease and death caused by the heavily-mutated Omicron variant but less effective in preventing transmission.

With cases soaring, some countries have expanded COVID-19 vaccine booster programs or shortened the gap between shots as governments scramble to shore up protection.

In an interview with Israel’s N12 News, Bourla was asked whether he sees booster shots being administered every four to five months on a regular basis.

“This will not be a good scenario. What I’m hoping (is) that we will have a vaccine that you will have to do once a year,” Bourla said.

“So from a public health perspective, it is an ideal situation. We are looking to see if we can create a vaccine that covers Omicron and doesn’t forget the other variants and that could be a solution,” Bourla said.

2.MORGAN STANLEY:  Morgan Stanley Chief Executive Officer James Gorman will get a 6% rise in annual pay, bringing his total compensation for 2021 to $35 million, the bank said on Friday.

On Thursday, the board of JPMorgan Chase & Co gave a 9.5% raise to CEO Jamie Dimon, bringing his total compensation for 2021 to $34.5 million.

Since taking over a decade ago, the 63-year-old CEO has transformed Morgan Stanley from a Wall Street firm focused on a money-losing trading business into a more balanced bank. He was the driving force behind Morgan Stanley’s decision to acquire brokerage firm and investment adviser Smith Barney that helped make wealth management the cornerstone of his plan to stabilize revenue.

Morgan Stanley directors based the pay decision on Gorman’s individual performance and the bank’s record earnings in 2021, it said.

3.ACTIVISION:- A group of employees at an Activision Blizzard studio that works on the “Call of Duty” franchise said on Friday that they had formed a union and would seek voluntary recognition from the company, signaling organized labor’s first foothold at the video game giant.

The union, supported by the Communications Workers of America, represents 34 people in the quality assurance department at Raven Software.

Activision said it was considering the matter. Workers could also seek to hold an election supervised by the National Labor Relations Board (NLRB).

As criticism of Activision Blizzard’s culture has mounted in recent months, workers have banded together to influence the company’s future, including staging a walkout and circulating a petition calling for the removal of Chief Executive Bobby Kotick.

Unionization has emerged as a goal for some, and workers in other parts of Activision Blizzard are also signing union cards, said Jessica Gonzalez, a former Activision employee, as well as a current employee who spoke on condition of anonymity.

“I hope that we are able to serve as an inspiration and to help guide other parts of Activision Blizzard … that want to follow in our footsteps,” said Onah Rongstad, a quality assurance tester at Raven.

Activision Blizzard said in a statement that it is “carefully reviewing” the request for voluntary recognition.

4.JP MORGAN: -JPMorgan’s head of digital assets Umar Farooq called crypto “clunky” and compared it to the state of the music streaming industry in the ‘90s. Farooq noted that the future looks bright for crypto, similar to the evolution of the music industry into Apple Music and Spotify.

Farooq’s comments follow a similar one by JPMorgan analyst Kenneth Worthington earlier in the month, who said that crypto would become increasingly relevant to the financial services industry this year. He predicted US-based exchange Coinbase would become one of the largest beneficiaries of crypto adoption

5.LUFTHANSA :-Germany’s Lufthansa is set to buy a 40% stake in state-owned Alitalia’s successor ITA Airways and a deal could be unveiled next week, Italian daily Il Foglio reported on Saturday.

ITA Airways started flying on Oct. 15 with nearly 2,300 employees and a fleet less than half the size of that operated by Alitalia, the 75-year old former national carrier which passed through a dizzying succession of restructurings and changes of ownership.

The newspaper did not give a price for any deal but said the two companies were very close to agreeing over some key terms, such as the role of Rome’s Fiumicino airport as a hub for direct flights to Africa and some routes to the Americas.

An ITA spokesperson said on Saturday that the airline’s top management would present a strategic plan to the company’s board on Jan. 31. A data room would be opened in the following days, he added, allowing a potential bidder or partner to have access to key financial documents to assess the value of the company.

The report comes after sources told Reuters on Jan. 12 that ITA was in contact with Lufthansa, British Airways, and United States-based Delta Air Lines for an equity partnership, saying that formal talks could start by the end of March.

A Lufthansa spokesperson said at that time that the German carrier was open to the possibility of a partnership with ITA.

Delta denied it planned to invest in ITA.