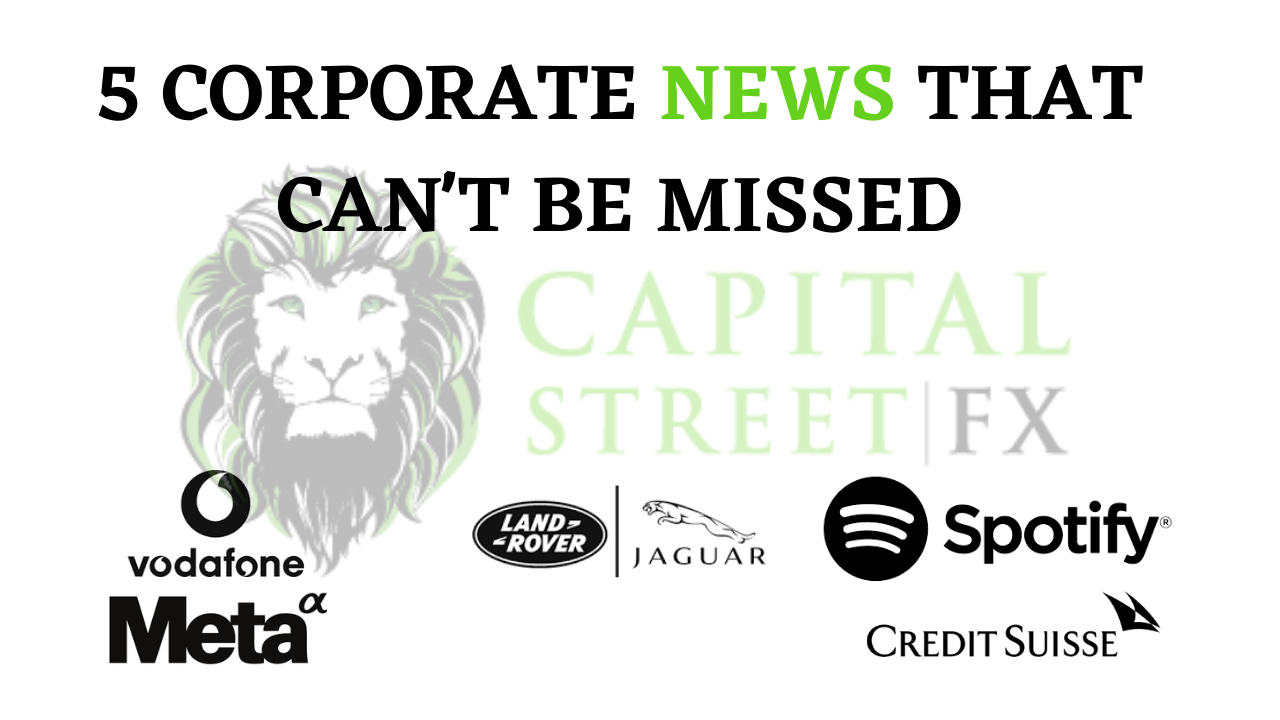 Automakers worldwide have been roiled by the chip shortage, along with supply chain disruptions, COVID-19 restrictions, and rising raw material prices after a short-lived recovery towards the end of 2020.

Retail sales at JLR, which accounts for most of Tata Motors’ revenue, fell 37.6% in the December quarter from a year earlier, and production volumes jumped 41% sequentially, the company said.

“The semiconductor shortage is expected to continue through 2022 but is expected to gradually improve as capacity within the supply base increases”, Tata Motors said in an exchange filing on Monday.

2.META: Since October, Facebook has renamed the company, articulated a vision of the internet where people can digitally connect through virtual-reality avatars or teleport to see places like ancient Rome, and helped trigger the metaverse investment craze.

When the company, now Meta Platforms Inc, reports fourth-quarter results on Wednesday, investors will get a new window into the financial impact of CEO Mark Zuckerberg’s current passion.

Meta plans to break out the results of its augmented and virtual-reality hardware unit, Reality Labs, for the first time, an investment the company previously warned would cause a $10 billion hit to 2021 profit and would not be profitable “any time in the near future.”

The company is hiring engineers and buying up multiple virtual reality gaming studios to build toward the metaverse, which is a broad futuristic idea of shared virtual realms that can be accessed via different devices and which Zuckerberg is betting will be the successor to the mobile internet.

Analysts said they would be keen to see indicators about the Reality Labs division’s profitability, how long it might be a drag on the advertising side and evidence around the strength of VR headset sales.

“It’s going to be huge for me as an analyst, not having to surgically dig through Facebook earnings … and just see a lens into the Reality Labs,” said VR market analyst Stephanie Llamas of VoxPop.

Meta has said it expects non-advertising revenue to be down year-over-year in the fourth quarter as it compares unfavorably with the “strong launch” of its VR Quest 2 headsets during the previous year’s holiday shopping season.

The company has not released sales numbers for Quest headsets, but a July recall notice for the Quest 2’s facial foam liners said it affected about 4 million units in the United States. In a sign of strong sales for the headsets during the recent holiday period, its Oculus app hit the top spot on the U.S. App Store for free iPhone apps on Christmas Day.

3.VODAFONE:- Vodafone stock traded 4% higher in London on reports of activist investor Cevian Capital coming to own a stake in the telecom company.

Cevian has been in talks with Vodafone officials in recent months, pushing the carrier to improve performance, according to various reports.

The report said choices before the Swedish investment firm include pushing the British firm to consolidate its presence in key markets, selling some operations or pursuing stock buybacks.

The mobile services firm is present in the U.K., Germany, Italy, Spain and sub-Saharan Africa. It also has a joint venture in India but marked down the value of that business to zero more than two years back due to repeated losses and years of legal disputes that are now over.

4.SPOTIFY: Popular U.S. podcaster Joe Rogan has apologized amid a backlash against COVID-19 misinformation in his program, while his platform, Spotify Technology SA , said it would add a “content advisory” to any episode with a discussion of COVID.

Rogan, a prominent vaccine skeptic, has stirred controversy with his views on the pandemic and on vaccines and government mandates to control the spread of the virus.

Singer-songwriters Neil Young and Joni Mitchell announced last week that they were removing their music from Spotify in protest at coronavirus misinformation broadcast on the platform.

Young objected to his music being played on the same platform as the top-rated podcast, “The Joe Rogan Experience.”

In a 10-minute Instagram video post on Sunday evening, Rogan apologized to Spotify for the backlash but defended inviting contentious guests.

“If I pissed you off, I’m sorry,” Rogan said. “I will do my best to try to balance out these more controversial viewpoints with other people’s perspectives so we can maybe find a better point of view.”

Separately, Spotify chief executive Daniel Ek posted a blog saying an advisory will direct listeners to a COVID-19 hub that contains information from medical and health experts, as well as links to authoritative sources.

5.CREDIT SUISSE :-Swiss prosecutors are pursuing around 42.4 million Swiss francs ($45.5 million) in compensation from Credit Suisse in a money-laundering trial due to begin on Feb. 7, the Swiss Federal Criminal Court (FCC) said on Monday.

The Office of the Attorney General (OAG) indicted the bank in December 2020 after an investigation into the activities of a Bulgarian crime ring involving top-level wrestlers accused of laundering profits from cocaine trafficking.

Credit Suisse said it “unreservedly rejects as meritless all allegations in this legacy matter raised against it and is convinced that its former employee is innocent”. The bank told Reuters that it would defend itself vigorously in court.

Switzerland’s second-biggest bank, which is trying to rebuild its reputation after a series of scandals and the abrupt departure of its chairman, issued a profit warning last week due to legal costs and a slowdown in its trading and wealth management divisions.